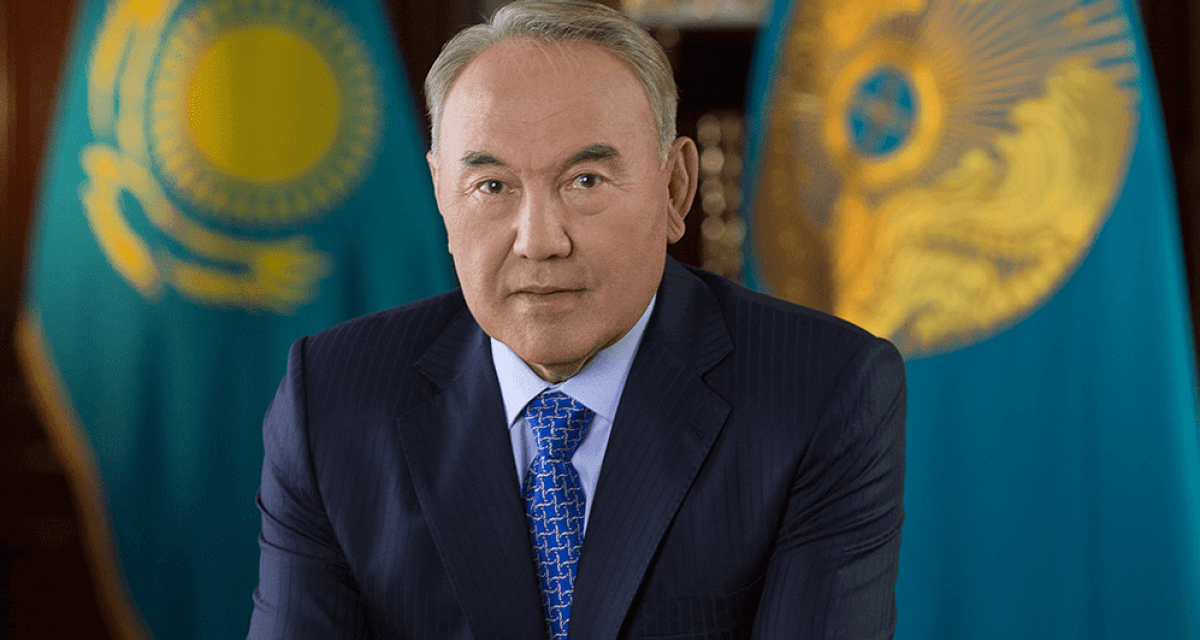 The 1 of December, the day when citizens of our country celebrate a public holiday – the Day of the First President of the Republic of Kazakhstan Nursultan Nazarbayev. The celebration was initiated in December 2011 on the eve of the 20th anniversary of the independence of the Republic in recognition of the achievements of the Kazakh leader. It was on the day, December 1, 1991, when Nursultan Nazarbayev became the head of the young independent state, it was on this day that the institution of the presidency of the Republic of Kazakhstan was established, which had an undeniable impact on the entire course and development of the independent state.

Nursultan Nazarbayev described in detail his path as head of state, as well as the challenges faced by the Kazakh people after the collapse of the Soviet Union and look on the future in his book “The Era of Independence”, the Portuguese version of which was presented in March 2019 at the Ministry of Foreign Affairs of Brazil ( an electronic version is available https://www.gov.kz/memleket/entities/mfa-brazil/documents/details/40423?lang=pt-br).

As the current President of Kazakhstan Kassym-Jomart Tokayev notes in his article “Lessons from a Historical Personality”, the construction of an independent state, which is “one of the ten largest countries in the world, generously endowed with natural resources and had nuclear weapons inherited from the Soviet Union in its arsenal, was the very fate intended for the great son of his people, the founder of our state, the First President of Independent Kazakhstan – Elbasy Nursultan Nazarbayev”. The path of history is never simple and straightforward. Ups and downs, sharp turns are possible, and there are also numerous “amateurs” to criticize the era. But there are few individuals who can make bold decisions and act, who make history and lead into a new era. Among them is our First President, Elbasy Nursultan Nazarbayev, an outstanding statesman and a unique reformer, rightfully recognized and respected by the entire world community. Thanks to Elbasy, Kazakhstan has become an authoritative and successful member of the international community. It is to the phenomenon of Nursultan Nazarbayev that we owe the fact that in difficult times the unity and consent of the people was preserved, Kazakhstan moved to a market economy and became an active participant in global economic processes.

The country’s geographic location, sandwiched in the center of the continent between the major powers and the unstable south, determined the difficult geopolitical situation and limited economic opportunities. The volume of industrial production in Kazakhstan in 1990-1994 fell by half, transportation – by 2/3, agriculture – by 30%. Industrial giants of union importance in the coal, mining and other industries stopped. Unemployment grew, and massive economic migration

began. Kazakhstan had to overcome the existing ineffective economic model. In a country that aspired to a market economy, archaic mechanisms of management and organization of state institutions remained. It was important to preserve peace and harmony in a multi-ethnic society, which consists of more than 130 nationalities, professing more than 30 religious confessions. The task arose of building external relations with neighbors and large countries, it was necessary to look for their place in the world community. Young Kazakhstan went through all these hardships under the leadership of the First President. With the passage of time, it is obvious that during the period of uncertainty, the Kazakhstani leader managed not only to make bold decisions for his time, but also to unite the society in the crisis period and bring it to a new level of development. Nursultan Nazarbayev, having singled out certain universal principles of state building from world experience, was able to skillfully impose them on the national context and form his own development model. He presented the formula of state development “first – the economy, then – politics”, that is, initially the country made a bet on economic development, and on this basis – the development of democratic institutions.

The efforts of the First President of Kazakhstan were focused on the three stages of modernization initiated by him.

The first modernization – the beginning of the 1990s – then the task was to rebuild the public administration system, form the foundations of a market economy and integrate into the world community. Kazakhstan has chosen democracy as a model of political development, having carried out a “triple transit” in the economic, social and socio-political spheres. In 1993, the introduction of the national currency tenge into circulation became significant. On the basis of the new Constitution in 1995, a political system was created with the separation of the executive, legislative and judicial powers, and the foundation of the rule of law was laid. Kazakhstan declared itself as a state oriented towards peaceful development, and gave up the fourth most powerful nuclear arsenal inherited from the Union State. The decree on the closure of the Semipalatinsk nuclear test site is a step that brought worldwide recognition to Nursultan Nazarbayev. In 1997, having presented to the public the Development Strategy until 2030 with a detailed action plan for all spheres of life, he directed the country to look ahead. 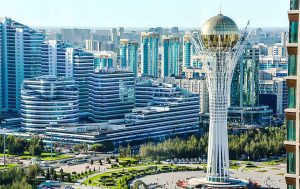 The second modernization started in the third quarter of the 1990s and ended in the mid-2010s. Under the leadership of Nursultan Nazarbayev, the economy entered the trajectory of sustainable growth, a modern system of state institutions and a middle class were formed in the country. The quality of life has noticeably improved, if at the beginning of the 1990s GDP per capita was $ 700, then by 2013 this figure had already reached $ 12,000. The World Bank has included Kazakhstan in the number of middle income countries. The state passed through two world economic crises of 1998 and 2008-2009 without tangible losses. A major successful achievement of the

republic at that time was the transfer and construction of the new capital of the state – Astana, which last year was renamed Nur-Sultan in honor of the author of this initiative. The new administrative center of the country has solved a whole range of strategic tasks of state development and has become a symbol of a new historical era. In 2012, Kazakhstan became one of the 50 most competitive countries in the world. In the same years, in the Strategy “Kazakhstan-2050” Nursultan Nazarbayev presented a new ambitious development goal – to take a place among the 30 advanced countries of the world. Thanks to the First and Second modernizations, the tasks of dismantling the totalitarian system and building a market economy, early entry into the top 50 most competitive countries of the world were successfully solved.

The third modernization, announced by the First President in 2017, is aimed at renewing the country and moving it into 30 prosperous states in a new global reality. Thanks to the current policy, Kazakhstan’s GDP grew from $ 22 billion to $ 184 billion. Efforts to develop business activity led the country to rise from 86th place in 2005 to 25th position in 2019 in the international Doing Business ranking.

On March 20, 2019, Nursultan Nazarbayev resigned as President of the Republic of Kazakhstan at his own request, noting that the Speaker of the Senate Kassym-Jomart Tokayev would be the acting head of state. In his address to the people, he said: “I have made the decision to end my powers as President. This year marks the 30th anniversary of my holding the highest post. The people gave me the opportunity to be the first president of independent Kazakhstan”. The first President, Elbasy Nursultan Nazarbayev retained the post of head of the country’s Security Council, member of the Constitutional Council of Kazakhstan and chairman of the Nur Otan party.

The results of the presidential elections held on June 9, 2019 and the victory of Kassym-Jomart Tokayev became a positive strong signal for the entire world community that Kazakhstan is a democratic, peaceful and stable country. The elections confirmed that our country is focused on justice, progress and continuity of domestic and foreign policy.

A stable state system and a strong presidential power made it possible to carry out a deep reform of the country, which is going through a stage of global competition for a place among the most developed countries. At the initiative of the President of Kazakhstan Kassym-Jomart Tokayev, modernization measures are being implemented today aimed at strengthening the efficiency of the public administration system, economic development in new realities, unlocking industrial potential, developing agriculture, raising the level of the transport and logistics complex, supporting small and medium-sized businesses, promoting the system health care, balanced territorial development, improving the social well-being of Kazakhstanis, increasing the role of ecology and protecting biodiversity, building a

fair state on protecting the interests of citizens, increasing the degree of digitalization of the country and civil participation in government. These measures are especially relevant during the fight against the coronavirus pandemic and the global economic crisis, and they will also help to successfully overcome the difficult situation in the country.

The creation of their own state is a turning point in the thousand-year history of the people who from time immemorial controlled the vast expanses of Central Eurasia. As a result of multidirectional reforms under the leadership of the First President of Kazakhstan, the country managed to make a “leap in time”, without hesitation moved from the Soviet political, economic and historical era to a new one – to the milestone of Independent Kazakhstan. Elbasy is the founder of our state, a symbol of the unity of the people, a person who stands at the origins of the history of independent Kazakhstan!

Embassy of Kazakhstan to Brazil

Embaixada do Cazaquistão no Brasil