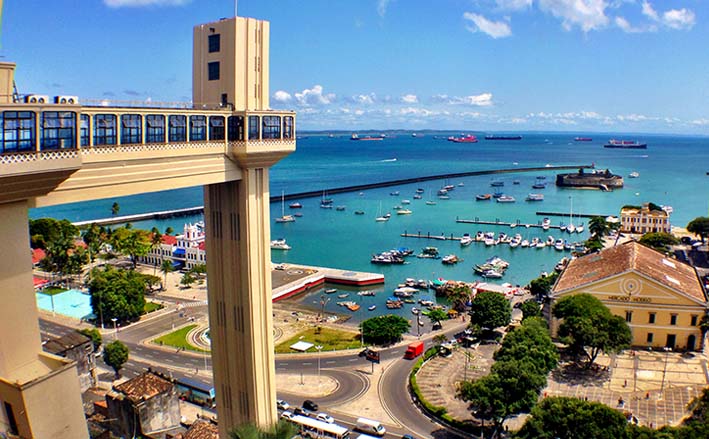 If Sao Paulo is the head (and hands!) and Rio de Janeiro the heart, then Salvador can be considered very much as the soul of Brazil.

Over two centuries, from 1549 and 1763 to be exact, the city of Salvador was the administrative and political centre of colonial Brasil.

The remains of the long gone capital of Brazil are beautifully restored and can be marvelled at in Pelourinho, the historic centre of Salvador.

Salvador is also beautifully located on a small, roughly triangular peninsula that separates the Todos os Santos Bay (‘All Saints Bay’) from the open waters of the Atlantic Ocean.

After Rio de Janeiro, the city of Salvador is Brazil’s main tourist destination. However, at the start of the new millennium there are more industries other than tourism which contribute to Salvador’s prosperity.

Salvador is boasting a large oil refinery, a petrochemical plant and other important industries which reduces its historical dependence on agriculture. Nevertheless, Salvador is home to many poor Brazilians and economical and social contrasts are vast, even to Brazilian standards.

Salvador da Bahia has a captivating diversity of cultures and people. Owing to the massive slave trade history, Bahia has the highest percentage of Brazilians of African descent. The exciting rhythmic music, the delicious Bahian cuisine, the ‘martial dance’ capoeira, the spiritual religion Candomblé and even Carnaval: they all have African roots to a certain extent.

In this context it is safe to say that Brazilian culture as a whole is rooted very much in Salvador’s legacy!